TOPICS MENTIONED IN THIS MARKET BRIEFING:

European Stock Exchanges move without a clear trend at the start of Monday’s session, with the drop in oil prices and the rise in bond yields limiting the positive effect of Wall Street’s strong closing on Friday.

They ended in the red on Friday after the monthly employment figures in the United States, marked by job creations well above expectations and a marked increase in wages, developments likely to justify interest rate hikes in the coming months.

However, investors remain concerned about the prospect of an accelerated tightening of monetary policy by the Fed and that of a first rate hike by the European Central Bank this year.

The week that is beginning will also be punctuated, like the previous one, by the publication of results in the United States, Europe and Japan. And investors will continue to monitor geopolitical news with the continuation of discussions on Ukraine and NATO on the one hand and the real or supposed progress of the Iranian nuclear talks on the other.

Wall Street ended on a mixed note on Friday, hesitating between good corporate results and the robust US economy on the one hand, and fears of aggressive monetary tightening on the other.

Investors badly digesting the publication of the monthly report on employment, which reported 467,000 jobs created in January, more than triple what was predicted by economists (150,000). In addition, the December figure was subject to a major revision, from 199,000 creations to 510,000.

At the end of the employment report, nearly 40% of operators were even expecting a 50 basis point increase in the Fed’s key rate as of March, whereas they were only 2% a year ago. month. The US central bank is indeed accustomed to increases of a quarter of a point each time.

Investors are now awaiting the monthly consumer price figures in the United States on Thursday, which should also fuel the debate on the extent and pace of monetary tightening to come.

The oil market remains close to its highest levels in more than seven years but seems torn between fears linked to tensions around Ukraine and signs of progress in the discussions on Iran.

Find the full economic calendar to know all the economic events to comer.

CHART OF THE DAY – EUR/CHF: the beginning of a bullish recovery 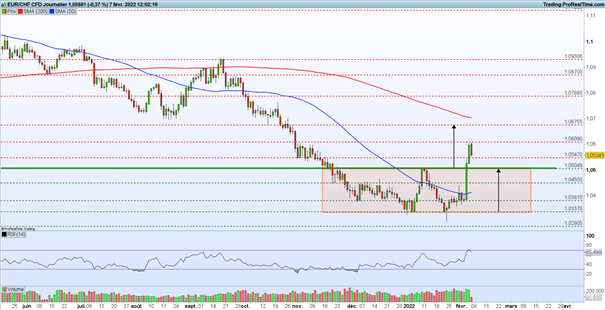 Switzerland’s unemployment rate remained unchanged month-on-month at 2.6% in January.The latest figure is below the consensus estimate of 2.7%, with around 122,268 registered unemployed at the end of January.

On the chart side, the euro is catching its breath after its powerful bullish rally triggered by the ECB’s announcements last week. The EUR/CHF had just validated a reversal chart pattern, a double dip. Thus, this technical configuration pleads for a continuation of the increase in the short term.

A pullback to 1.0505 could not be ruled out, however the bullish flow does not show signs of slowing down. Therefore, the pair remains well oriented to rally 1.0675 around the 200 period moving average.

Whether you are a new or experienced trader, DailyFX has many resources to help you: