European stock exchanges ended up on Thursday after the Bank of England’s announcements pave the way for monetary tightening in the face of inflation, while the European Central Bank is maintaining a more accommodating policy for now.

The stock markets took advantage of the last two days of announcements from the major central banks, most of which have decided to reduce their aid measures introduced in the face of the COVID-19 pandemic.

The ECB, for its part, has shown itself less determined to turn the page on its support for the economy: it has announced a reduction in its asset purchases but has promised to continue to promote the recovery in 2022.

But if investors initially welcomed the initiatives announced by the US Federal Reserve to fight against rising prices, the prospect of rate hikes in the United States next year is leading them to turn away from equities.

In the morning, the announcement of a more marked deterioration than expected in the business climate in Germany penalized the stock markets. The Ifo business climate index fell to 94.7 in December from 96.5 (revised) last month as the Reuters consensus put it at 95.3.

Wall Street weighed down by the Nasdaq

Wall Street ended down Thursday, particularly the Nasdaq, as investors turned away from major technology stocks in favor of sectors more sensitive to changes in the economy in the aftermath of the announcements by the US Federal Reserve (Fed).

Due to the decline in technology stocks, the Nasdaq and the S&P 500 ended up in the red even as most sectors rose during the session.

At the end of its monetary policy meeting, the Fed indicated on Wednesday that it would end its bond buying programs next March and paved the way for three interest rate hikes in 2022.

These announcements from the central bank have delighted investors, who are increasingly worried about the surge in inflation resulting from the coronavirus health crisis. But, Thursday, they favored profit taking to the detriment of technology stocks.

The oil market is declining as increased contamination with the Omicron variant has raised fears that possible restrictions could affect demand for crude.

GRAPH OF THE DAY – Gold: a symmetrical triangle 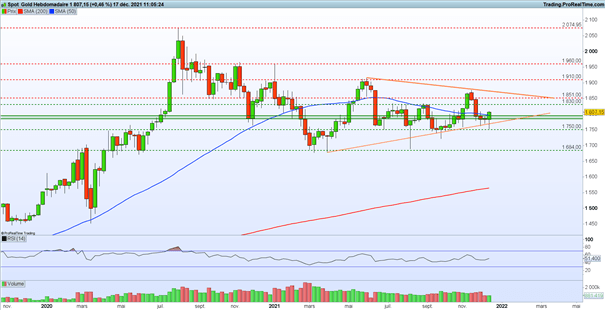 After being neglected by investors for several weeks, the price of gold is picking up again since the Fed’s announcements.

In the short term, the yellow metal is trying to break through resistance around $ 1,800 coupled with the 50 period moving average. A weekly close above this level would allow the market to continue its ascent towards $ 1,830 and then $ 1,850.

In the medium term, prices consolidate in a symmetrical triangle. Thus, breaking the upper limit would pave the way for a long-term bullish recovery for 2022. Difficult to say with certainty a strong comeback of precious metals next year. Nevertheless, the graphical analysis delivers positive technical elements and the long-term dynamic remains bullish.