European stock exchanges evolve up Monday at the start of the session, resuming their march forward, supported by cautious optimism around the Omicron variant of the coronavirus.

European stock markets are moving forward after being destabilized last week by speculation about an acceleration in monetary tightening in the United States and by concerns about the evolution of the COVID-19 pandemic.

Although not much is known about the Omicron variant, the market seems reassured for the moment by the absence of serious cases detected so far after infection with this new strain.

While the day promises to be calm, the rest of the week will be richer in events with in particular the monetary policy decisions of the Bank of Canada on Wednesday and an intervention by Christine Lagarde, President of the European Central Bank, at the conference. of the European Systemic Risk Council or the publication of the consumer price index in the United States on Friday.

Wall Street ended the week in the red

Wall Street ended lower on Friday fears about the health and economic consequences of the Omicron variant of the coronavirus continuing to destabilize the markets.

The smaller-than-expected rise in job creation in the United States in November helped allay concerns about a more rapid tightening of monetary policy by the Federal Reserve (Fed).

Figures released by the Labor Department showing that job growth slowed last month with 210,000 non-farm jobs created against 546,000 (revised) in October and 550,000 expected according to the Reuters consensus.

In the general opinion, the employment report, even worse than expected, is not likely to change the trajectory of the Fed, which should accelerate the normalization of its monetary policy.

Oil prices rise more than 2% after Saudi Arabia raised the selling prices of its benchmark crude for the Asian and American market while indirect negotiations between the United States and Iran on the revival of the agreement reached in 2015 on Tehran’s nuclear program appear to be at an impasse.

CHART OF THE DAY – EUR / CHF: a bullish divergence 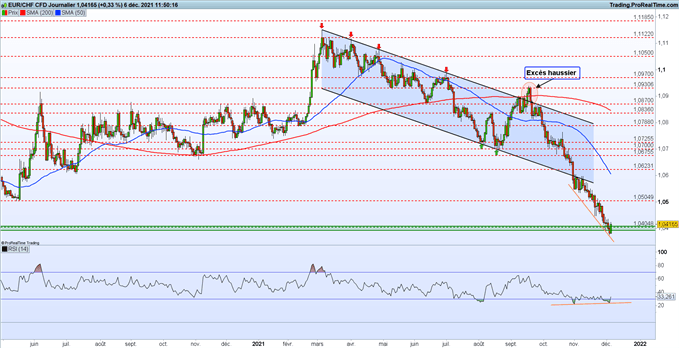 LThe euro begins to rebound against the Swiss franc at the start of the week. The pair seems to mark a market bottom in the support area towards CHF 1.04. For now, the session is characterized by a flow and directional candle, so the pair could gain some ground in the coming days.

Prices are also trying to validate a bullish divergence on RSI. Therefore, if the signal is confirmed the market should start a rally towards the resistance at 1.05 CHF. In addition, the Swiss National Bank intervenes in the foreign exchange market to prevent the franc from appreciating too strongly, which constitutes major support.

However, given the current context and the risks weighing on the markets, the Swiss franc appeals to investors with its status as a safe haven currency. As a result, we believe that the franc should still remain strong but that a stabilization phase between CHF 1.05 and CHF 1.04 is now legitimate for the weeks to come.

Pharma companies will decide the manufacturing and pricing of drugs themselves, the Pharma Association said

An increase in the price of gold by Rs

What has been the inflation situation in the country, the statistics agency has released the data