Shahbaz Gul presenting degrees to students at the convocation [فائل-فوٹو]

Lahore: Prime Minister Imran Khan’s Special Assistant for Political Relations Shahbaz Gul was invited as a special guest at the convocation ceremony of College For Women University Lahore who was presenting degrees to the successful students.

According to details, when it was the turn of a woman named Dr. Fauzia Imran to receive the degree on stage, she refused to receive the award at the hands of Shahbaz Gul.

After the incident, it was claimed that Dr Fauzia Imran was a relative of PML-N leader and former federal minister Khawaja Saad Rafique. 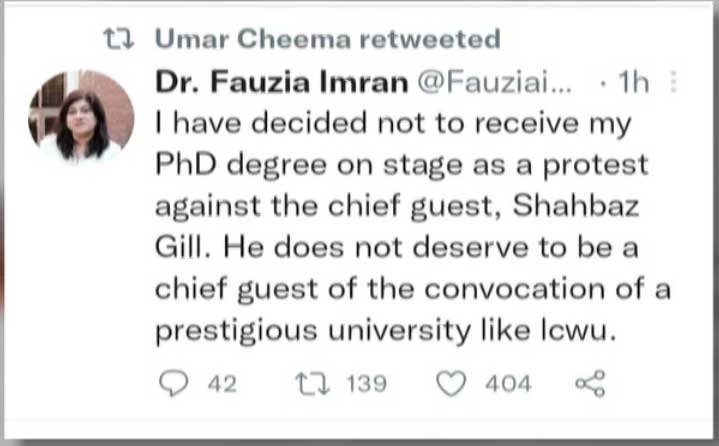 In her tweet, Dr Fauzia Imran slammed Shahbaz Gill, saying he did not deserve to be the special guest of the convocation. Therefore, I will not receive a degree from them. However, the college principal said that the female professor’s Twitter account had been hacked. The female professor did not say such a thing.

Expressing his views on this incident, Shahbaz Gul said that who likes to get a degree from whom, this is the basic right of all. The woman is a relative of Khawaja Saad Rafique. This claim has also come to light from the Special Assistant.

On the other hand, PML-N leader Azmi Bukhari, while reacting to the incident, said that the reward of action is his name. They are reaping what they have sown. He also said that it was important to check the degree of Shahbaz Gul and his mental balance.

A fire broke out in a house in Shah Jamal area of ​​Lahore, a two-year-old child died

Imran Khan has a misconception that he will get two-thirds majority if elections are held: Yusuf Raza Gilani